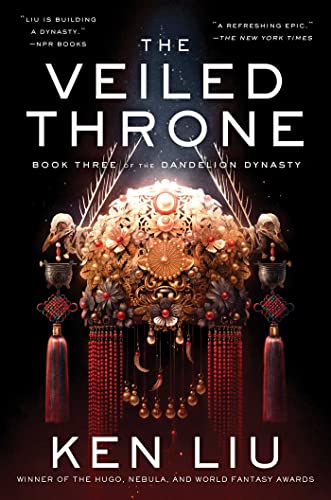 Hugo and Nebula Award winner Liu’s masterful third Dandelion Dynasty fantasy (after The Wall of Storms) returns to a world steeped in myth, philosophy, and East Asian culture with a densely woven story of cultural conflict, political intrigue, and family rivalry. Princess Théra, successor to her infamous father, Kuni Garu, the Emperor of Dara, has turned the throne over to her brother Phyro while she leads troops against the Lyucu beyond the Wall of Storms. But defeating the enemy requires more than just military superiority; next comes the struggle to assimilate, reconciling the distinct Lyucu and Daran cultures. Théra works toward this goal while completely cut off from Phyro and Dara, where still more changes, both social and technological, are underway. Liu’s world is lively, fluid, and above all, original, populated with nuanced characters, mighty flying lizards, sentient narwhals, and living books. Wooden submarines, large scale shadow puppet plays, and airships made of bamboo and silk powered by “silkmotic force” add to the dazzling atmospherics as Liu mixes the drama of heroic wuxia battles with twisty intrigues and the characters’ ever-shifting priorities, balancing each element to create the epic feel of real history. With a third installment just as mesmerizing as the previous volumes, this series continues to be a wonderful and necessary breath of fresh air in epic fantasy. (Nov.)
close
Details

Vampire Weekend
Vampire Weekend
Mike Chen
A love letter to the power of music, this thoughtful, humorous exploration of what constitutes living versus mere survival sees Chen (Light Years from Home) at the top of his Continue reading »