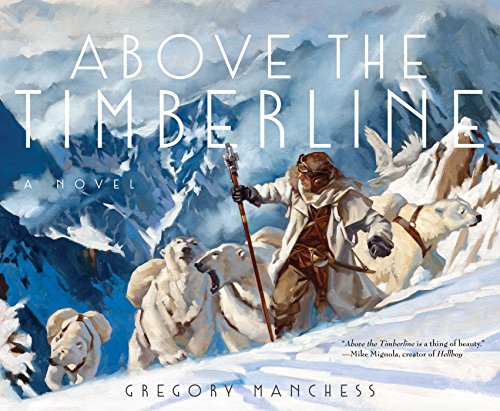 This illustrated novella could have been astounding. Manchess, an award-winning artist, created more than 100 gorgeous images to tell the tale of Wes Singleton, an intrepid young adventurer searching for his missing father in a world of ice and danger.

The art is amazing on its own, rich with texture and vibrantly depicting his imagined winter wasteland; the idea of the story—an homage to early-20th-century pulp novels—pairs well with Manchess’s dynamic style. However, the brief text not only fails to reach the promise of the imagery, it includes nearly every troubling aspect of the pulps it’s inspired by.

Telling the story in journal entries, the stripped-bare writing provides only a skeleton, with the art clearly expected to fill out the rest. But this isn’t a graphic novel; the static presentation of Manchess’s paintings lacks the movement a reader expects from sequential art.

Unchallenged racism is revealed not just in the way characters talk about the wandering “tribes” of the frozen lands, but in the larger worldbuilding: the explorers, with advanced education and access to technology, are all white, while the “natives” are dark-skinned and superstitious, with non-Western names and a tenuous grasp on the English language that only shows up when the story wants to emphasize their otherness. The two women in this world exist to patiently compliment and inspire their men, while still being attractively “diminutive.” The love interest, a native princess, appeals to Wes because she was raised by (inexplicably Asian-themed) snow monks and “had lost all of her Tukklan gruffness.” She spends most of the book calling him “Mr. Wes,” and the one time she mentions his views about her people, it’s played as a moment to draw them closer together: he explodes at her, and she softens and changes the subject, never mentioning it again.

If the book were set at the end of the 19th century, some of this could be forgiven as the backward attitudes of the time, but it takes place in the year 3518, 1,500 years after an icy cataclysm. The dubious science and suddenly resolved ending are straight from those old pulps, though, including an alien McGuffin that explains little and, curiously, is never even used.

I imagine that if these beautiful paintings were presented as a gallery show, viewers could wander in awe through the collection, and the text would matter little. As an illustrated novel, it’s less impressive, with a story that, sadly, is nowhere near what Manchess’s sublime artwork deserves. (Nov.)

Carrie Cuinn is a writer, editor, and art historian.