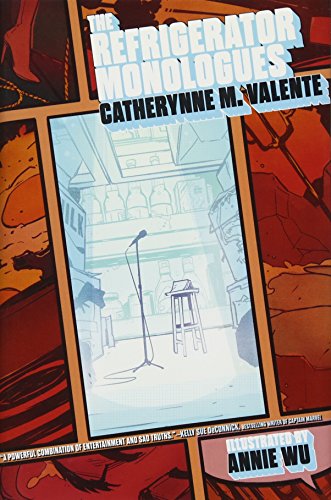 Bestseller Valente’s dazzling new story cycle creates its own comic book universe, complete with the gorgeously wrought prose pyrotechnics that readers have come to expect from her. She’s well known for her skill at unpacking the hidden truths embedded in fairy tales and archetypes; here she turns that skill on the troubling treatment of women in comic books, a perfect fit between author and subject matter. This is Valente at her sharpest and most pointed, ably assisted by illustrations from comics artist Annie Wu (Black Canary).

The title is a combined hat tip to Eve Ensler’s The Vagina Monologues and to “Women in Refrigerators” or “fridging,” the term that comics writer Gail Simone coined to sum up the common trope in which female comics characters meet tragic ends purely to advance the hero’s story and character development. (The term originated with 1994’s Green Lantern #54, in which hero Kyle Rayner’s girlfriend, Alexandra DeWitt, is killed by the villain Major Force and left in his refrigerator.) Valente’s slim book is both a critique of the fridging phenomenon and a rage-filled pleasure all its own.

Deadtown is a back corner of Hell where women wear the clothes they were buried in. “It’s always autumn in Deadtown,” the book begins. “It’s always the middle of the night, even at nine in the morning. We call ourselves the Hell Hath Club. There’s a lot of us. We’re mostly very beautiful and very well-read and very angry.” This club of deceased superhero girlfriends, wives, and associates meets at the Lethe Café, where a gargoyle named Neil slings espresso. It’s here in Deadtown where six women tell their own stories for a change, one by one: Paige Embry, Julia Ash, Pauline Ketch, Blue Bayou, Daisy Green, and Samantha Dane.

Comics fans will recognize echoes of Gwen Stacy’s perilous fall, Atlantean Queen Mera’s madness after her son’s tragic death, Karen Page’s journey to becoming a porn star and addict, and, of course, DeWitt’s ignominious end. But no comic book expertise is required to appreciate the brilliantly furious, self-contained stories here, which also happen to be slyly hilarious (Atlantis neighborhoods include East Gillage and Squid Row). This incisive and impressive collection—which arrives at a time of real changes in the comics world, with more women creators and more women in the spotlight as heroes—gives me hope that one day the fridging trope will find itself in Deadtown too, never to return to the land of the living.

Gwenda Bond is the author of the Lois Lane series of young adult novels.