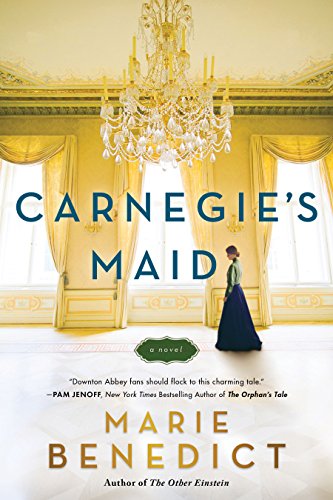 Andrew Carnegie’s impetus to take up philanthropy is explored in this excellent historical novel. Benedict (The Other Einstein) begins with Carnegie’s letter to himself from December 1868, in which he pledges most of his fortune “for benevolent purposes.” The story then turns to farmer’s daughter Clara Kelley, who travels in steerage from Ireland; upon landing in Philadelphia in 1863, she is mistaken for an identically named fellow passenger who has died during the passage. Desperate to improve her family’s fortune, she assumes the other Clara’s place as a lady’s maid to the formidable Margaret Carnegie, mother to brothers Andrew and Tom. Clara’s education and sharp wit allow her to carry off the deception and, indeed, her intellect brings her to Andrew’s attention. She earns his respect and even affection, but differences in status make any prospect of a relationship unlikely. While there are elements of Cinderella, Benedict doesn’t let herself or her characters stray from historical realities. The true reason for Carnegie’s transformation from industrialist to builder of libraries for all remains a mystery, but Benedict’s imagination supplies a delightful possibility. Agent: Laura Dail, Laura Dail Literary Agency. (Jan.)

Correction: An earlier version of this review misspelled the name of the author's agent.