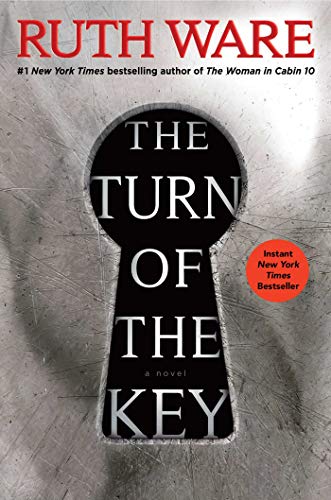 The Turn of the Key

Reviewed by Edwin Hill Ware’s excellent psychological thriller, as the title suggests, references Henry James’s The Turn of the Screw. It includes a nanny alone, a house that appears to be haunted, and children who aren’t quite what they seem. But Ware hauls the story into the 21st century by making the technology of today as menacing as the story’s isolated location, a Scottish estate. Rowan Caine, a young woman with secrets, stands accused of murdering one of the four children in her care while serving as a nanny. But which child died under her care, what brought Rowan to Scotland in the first place, and what were the events that led up to that fateful event? The answers to those questions slowly reveal themselves, with each answer resulting in a myriad of new questions. Unhappy in her job at a London daycare center, Rowan answers an advertisement for a live-in nanny, one with a very generous salary, for architects Bill and Sandra Elincourt. Even before traveling north to interview for the job, Rowan immediately discovers the first of many warning signs that maybe the position is too good to be true: four predecessors have all walked off the job in the last year. As a result, that promised salary comes in the form of a lump-sum bonus only after she’s completed her term of service. She also learns that the enormous house where the family lives has been wired to be smart in every way, with an Alexa-on-steroids program called Happy that manages the most mundane of daily activities—turning on lights, making lists—while also ensuring that privacy is a thing of the past. Once Rowan arrives in Scotland, she quickly wins over Sandra, whose claims to be less than enamored of the house’s technology prove to be less than genuine. Then Bill and Sandra announce they need to leave her alone with the children while they work on a major project, and those children are not enthralled by the new nanny. Ware does a good job of creating tension through the vastness of the house and grounds, bringing in elements such as a nasty housekeeper, a handsome handyman with an agenda, a walled poison garden, and an attic filled with secrets. But above all, Ware skillfully lays the bread crumbs to the novel’s satisfying conclusion without dropping too many hints or duping the reader. She presents Rowan as a woman making questionable decisions, and, by the end, provides a reason for each of those decisions, if not a justification. The final section not only pulls together the plot’s many threads but also leaves readers with one final, haunting question, one that will stay with them long after they turn the last page. Agent: Eve White, Eve White Literary (U.K.). (Aug.) Agatha Award finalist Edwin Hill is the author of Little Comfort.
close
Details