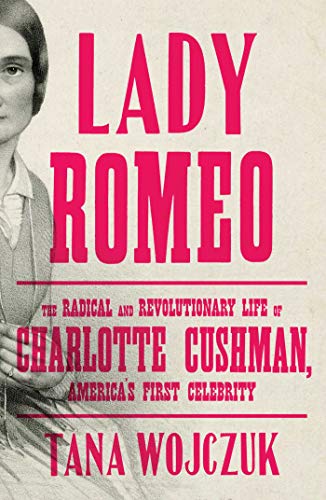 Guernica editor Wojczuk debuts with a brisk and vivid biography of actor Charlotte Cushman (1816–1876), who captivated audiences while breaking 19th-century America’s strict gender rules. Born to a middle-class family in Boston, Charlotte dropped out of school at age 13 and worked in her mother’s boardinghouse after her father abandoned the family. After a series of disastrous performances in her brief singing career, Cushman leapt at the opportunity to play Lady Macbeth in 1836; the role launched her to fame at a time when unescorted women weren’t allowed in theater audiences. In the 1840s, Cushman earned acclaim for her performances as Romeo (alongside her younger sister, Susan, as Juliet) in London and made a successful U.S. tour in which she portrayed both male and female characters, including Cardinal Wolsey in Shakespeare’s Henry VIII and the prostitute Nancy from Charles Dickens’s Oliver Twist. After falling in love with the writer Matilda Hays, Cushman moved to Rome—where the two lived openly as a couple—and established a network of female artists, before succumbing to breast cancer. Wojczuk enriches her portrait with lively theater gossip and detailed discussions of 19th-century class, social, and gender codes. This enthralling history restores Cushman to her rightful place in the spotlight. Agent: Kiele Raymond, the Thompson Literary Agency. (July)