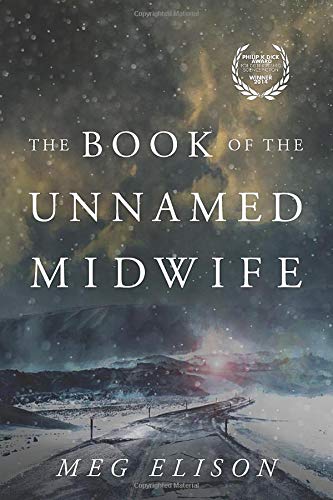 The Book of the Unnamed Midwife

Elison's gripping and grim first novel, which won the Philip K. Dick Award in its previous, small press publication, tells the story of an unnamed woman who survives a plague that wipes out most of humankind in just weeks, leaving 10 male survivors for every woman. Years after the initial wave of the terrible disease, all pregnancies still end in the death of the baby, and most also kill the mother. Told by turns through the diary of the protagonist, the diaries of other survivors, and third-person narration, the tale covers her several years of wandering, dressed as a man, from San Francisco, where she had worked as a nurse and midwife, through the dangerous, near-empty western U.S., where marauding groups of men try to enslave any woman they meet or are occasionally recruited into polyamorous "hives" dominated by one alpha woman. Eventually, she finds a stable, caring community where the inhabitants allow their members to find their own appropriate gender roles; at last she can live without fear, be the person she wants to be, and practice her trade for the betterment of everyone. The story is beautifully written in a stripped down, understated way, though frequently gruesome in its depiction of rapes, murders, and stillbirths. The protagonist, who sometimes calls herself Karen, or Dusty, or Jane, is beautifully realized as a middle-aged, bisexual woman with considerable skills, an indomitable will, and great adaptability, though she suffers considerably and is far from a superwoman. A prologue and an epilogue set long after the events of the main narrative (and reminiscent of the concluding chapter of Margaret Atwood's The Handmaid's Tale) hint at a positive future, leaving the reader with a glimmer of optimism in the midst of despair. This fine tale should particularly appeal to readers of earlier feminist dystopias such as The Handmaid's Tale, Suzy McKee Charnas's Walk to the Edge of the World series, and P.D. James's The Children of Men. Many questions are left unanswered at the book's end, but a sequel is forthcoming. (Oct.)
close
Details