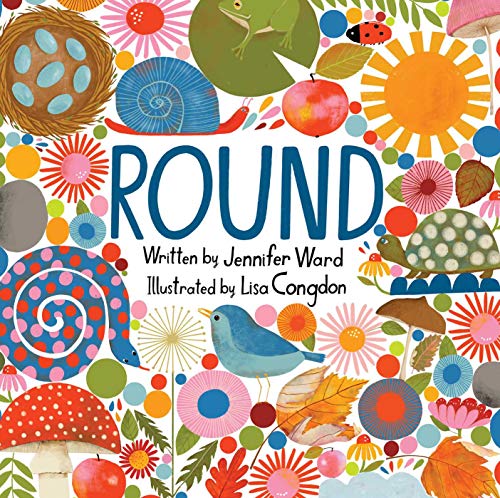 This environmental picture book’s front matter includes a brief introductory author’s note describing the science behind the text. While roundness in nature may not be represented in perfect spheres, Ward explains, it can be found everywhere: “in the lobe of a leaf and the smoothness of a stone, in the curl of a wave and the coil of a shell.” “Nature all around is round...” the spare text begins. “Silent round,” reads one verso page depicting a light blue-gray hare in a round-mouthed cave; “Violent round,” reads its recto, which shows a storm with distended-spherical raindrops. “Nest round./ Best round” attends a nest without and with eggs, respectively, perhaps prompting discussion, while “Twirling round./ Swirling round” accompanies a leaf with rounded edges and a variety of leaves spiraling in the wind. Artist Congdon, in her picture book debut, offers close-ups of flora and fauna in a vibrantly colored and multitextural, hand-stamped style. A simple science primer for the youngest readers. Ages 3–8. (Sept.)

Correction: This review has been updated to reflect changes to the book's final text.