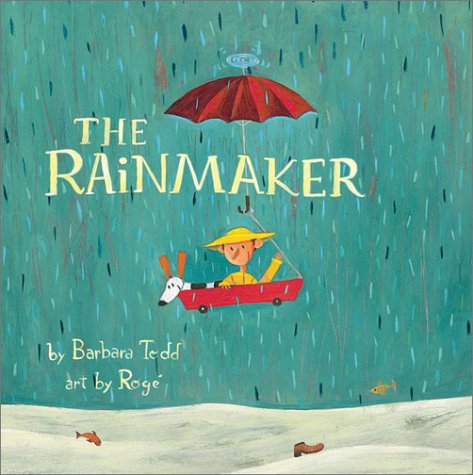 A cloud of confusion hovers over this fanciful story of a boy who discovers how to make rain. Despite the tenuous story line, the details at times provide an intriguing window into young Clarence's curiosity: "He wondered if clouds tasted good. If you ate one, would you float?" Yes, Roge () answers, painting the hero in a puffed-up yellow slicker, floating happily above the city. Clarence notices a sign over a tap that says "rain" (the "d" of the word "drain" has worn away). " 'I wonder...,' said Clarence. 'If I turn on the tap, will I really make rain?' " (Readers may well question why a faucet had been labeled a drain.) A torrential rain ensues, and "the Rainmaker," a bearded man sporting a long coat and hat, appears with a cart of magical umbrellas. The narrative wanders through whimsical but strangely incongruous scenes. The umbrellas cause mischief (one causes rain to fall only under the umbrella; another with a duck handle "quacks" at the man holding it); a flood ensues, and the boy can't turn off the rainfall until the Rainmaker returns with an oil can; and the man shares his duties with Clarence (giving him a handbook, some umbrellas, a paint can for rainbows, etc.). Adopting an appealingly naïve style in his acrylics, Roge peoples this nonlinear world with button-eyed characters and funky, distorted perspectives. In one scene, wind pushes Clarence "upside down and backwards" and an observant, galoshes-wearing beagle does a triple-take. Saturated aquas, blues and olive greens lend the antics a pleasingly damp atmosphere in this paper-over-board book. Ages 4-7.