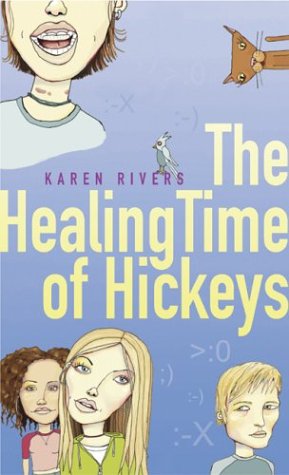 THE HEALING TIME OF HICKEYS

For narrator Haley, it's supposed to be "The Greatest Year of My Life. TGYML," but instead her senior year is one disaster after another: she's ignored by her longtime crush, gets black eyes from running into a tree—and when a boy does kiss her, she not only gets hickeys, but chicken pox (and, later, meningitis). Readers will quickly grow attached to Rivers's ( ) hypochondriacal narrator, who relates her hilarious but heartfelt story in a Bridget Jones–like diary. Her entries into her laptop, Junior, which she calls her "best friend," often begin with a chart of her mood, health, horoscope, and sightings of her crush, JT). Other features, such as play-like dialogue, lists and descriptions of diseases she researches on various Web sites, add to the fun—as does Haley's unusual storytelling style ("I trusted him," she says of the hairdresser, a referral from her marijuana-dealing father. "He seemed, uh, well. OK, I didn't trust him. I should have got out of the chair and run"). But even through all the outrageous antics, from Haley being voted onto student council while she spaces out in homeroom, to setting her hair on fire in the hospital, the novel conveys some moving moments. Readers will be touched when her father calls her "gorgeous" or when Haley, crying after her father finds her long-absent mother, gets a tight hug from her friend Kiki. Ages 14-up.