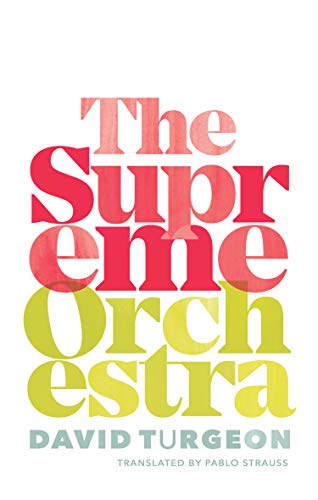 A man enters an art gallery and purchases an erotic drawing, which sets into motion a series of complex events in Turgeon’s solid first book to be translated into English. Among the litany of characters is the man who bought the drawing, Fabrice, also known as Charles Rose, an agent of an entity known only as The Service; Simone, the erotic artist; and Faya, Simone’s muse and lover—all of whom become embroiled in an elaborate political plot revolving around the acquisition of a 148-carat diamond known as the Supreme Orchestra, upon which “the stability of the entire region is at stake.” With pop songs that contain secret messages, a political revolution, and a kidnapping, Turgeon brings everything together as the race for the diamond concludes. The various components of the novel—the art world, the spy story, and Turgeon’s ornate prose—clash with each other, which sometimes leads to a discordant harmony, and sometimes to an outright cacophony. Deviously plotted and full of astutely wrought characters, the novel is by turns funny, frustrating, confusing, and exciting. “The world wasn’t that small,” someone thinks in disbelief at a very coincidental turn. He’s right, of course, but Turgeon’s novel, despite the large cast and their even bigger personalities, remains a little too small. (Nov.)
close
Details