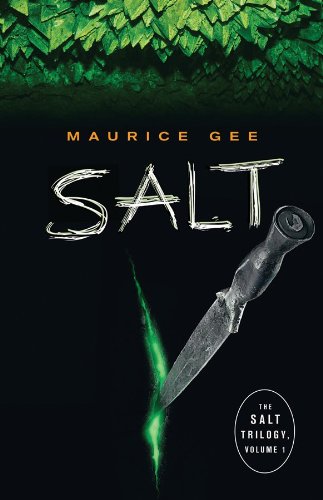 Celebrated New Zealand writer Gee ( ) returns to YA fantasy with this gritty, dystopian tale, the first volume in the Salt Trilogy. Hari lives in Blood Burrow, a hellacious, rat-infested slum. Long ago his dark-skinned people were conquered by Company (a fair-skinned, corporate society from across the ocean) and gradually forced into slavery (“Who joins Company joins history. Your time begins,” drones a clerk as new workers are branded with acid). Pearl is a pampered daughter of Company, her only purpose in life to be married off to cement one of her father's political alliances. When both young people, who share rare psychic gifts, revolt against their fates, they find themselves on a desperate journey across a hostile landscape, with the forces of Company at their heels. Later, as Company teeters on the brink of civil war, they must overcome their mutual distrust to save Hari's father from a horrific fate and destroy their enemy's deadly secret weapon. A compelling tale of anger and moral development that also powerfully explores the evils of colonialism and racism. Ages 12–up.