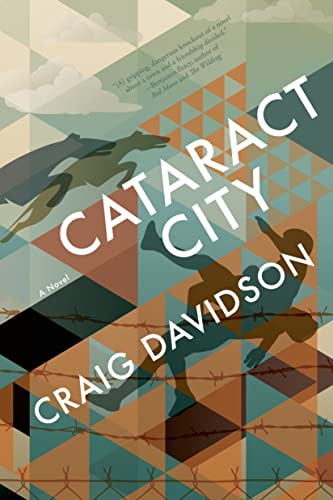 Childhood friends pursue lives on opposite sides of the law in this sweeping literary crime novel from Davidson (Rust and Bone). Owen Stuckey and Duncan Diggs meet as children, growing up on the streets of Cataract City, on the Canadian side of Niagara Falls. One night, during the chaos of a brawl, the 12-year-old boys are abducted, and spend a hellish week lost in the woods. From this point on, their trajectories split: Owen becomes a high school basketball star, and later a cop; Duncan becomes a boxer and small-time hood. Yet they remain tethered, not only by friendship and shared trauma but also by Edwina, a fiery free spirit they both love. When dogfighting, smuggling, and then murder ratchet up the stakes between the two men, old bonds are pitted against current loyalties. Davidson makes Cataract City itself a character, and brilliantly evokes life in a gritty industrial town—the men and women smell like their respective product lines at the local Nabisco factory, and drink at the same bleak bars their entire lives. Although Davidson takes a few small missteps—as children, the boys have confusingly similar nicknames, and some plot points strain credulity—the characters, audacious sweep of the story, and propulsive noir writing make this novel a standout. To live in Cataract City, Duncan observes, is “to accept many disappointments”; Davidson’s novel, on the other hand, lives up to its promise. (July)
close
Details