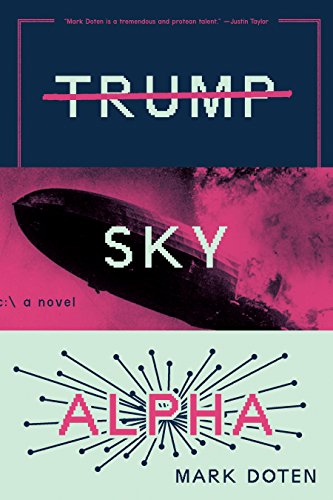 A blistering and heartbreaking satire in which president Trump brings about a nuclear apocalypse, Doten’s second novel (after The Infernal) is by turns a dystopian nightmare, a cyber thriller, a spot-on treatise on memes, and a tragic tale of love and loss. After the president, aboard his “ultraluxury zeppelin” named Trump Sky Alpha, executes a nuclear strike that kills a majority of the world’s population, Rachel, a tech journalist, receives an assignment for the reformation of the New York Times Magazine on “internet humor at the end of the world.” Though she finds the idea of the piece irrelevant, Rachel accepts with the condition that she be able to travel to the field where the bodies of her wife and daughter were taken. She’s led to “the room with what was left of the internet” to investigate the jokes, memes, and witticisms that were shared and posted as the global catastrophe took place, but she uncovers, instead, a possible explanation as to who was behind the cyber attacks that precipitated what becomes known as “1/28”— i.e., the day of the mass destruction. A group known as the Aviary, who were inspired by a 2015 novel called The Subversive, took credit for the four-day shutdown of the internet, and Rachel seems to have stumbled on some clues about their identities. Featuring a disturbing not-so-distant future, Doten’s novel is haunting, incisive, and surprisingly touching. (Feb.)
close
Details