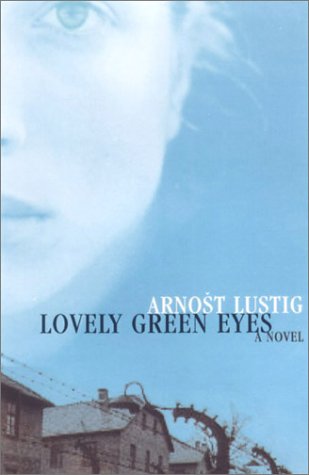 Prague-born Lustig () adds this chronicle of a resilient teenage girl to his highly regarded oeuvre of spare and haunting novels rooted in the Holocaust. The "lovely green eyes" of the title belong to 15-year-old Hanka "Skinny" Kaudersova, a shy, ginger-haired girl and the only member of her family to avoid death in Auschwitz. At first a cleaner in a camp hospital lab (where the doctor sterilizes her), she continues to evade extermination by lying about her age and her heritage (passing herself as Aryan) and is requisitioned as a prostitute in the German military field brothels. In a typical workday, Hanka services at least a dozen soldiers, many of whom are distraught and violent. Lustig presents the brothel clients as fully rounded characters, both viciously prejudiced against Jews and kind to the (Czech, they think) girl whose body they use. Constant hunger, freezing temperatures and disease further weaken Skinny's spirit, but as the war ends, she realizes she must search for her place in a world built on ashes. A rabbi, who is himself drowning in despair, attempts to offer her solace, but she's unable to shed her shame and guilt. Back in Prague, agonized by nightmarish memories, she settles in with a group of survivors and meets the narrator, whose declaration of love eventually thaws her heart. Lustig's prose is evocative at the same time it is sparse, even during harrowing scenes of physical and mental cruelty. Aided by a fine translation, this is a stunning work, worthy of comparison to those by Elie Wiesel and Primo Levi. In imagining the ordeal of a young girl "who had looked on the devil 12 times a day," Lustig has created an unforgettable character within whom "remembrance and oblivion contended," but who still summons the courage to affirm life.