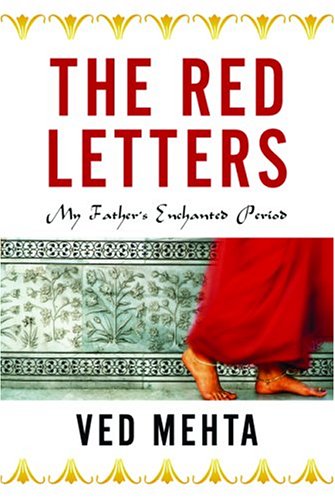 Imagine: you're a middle-aged adult and your elderly parent offers you a packet of love letters ("red letters") from an adulterous relationship that took place just before you were born. After you recover from the shock—you never imagined your parents being sexual, much less anything but faithful—you must decide whether you really want to know what's in the letters. If you're longtime writer Mehta, and you've already published biographical volumes on each of your parents ( ; ) without this information, the offer's both troublesome and irresistible. It began when Mehta's father asked him to collaborate on a novel about two lovers. As his father "slipped from conditional into indicative mood," Mehta realized he was actually hearing the truth about his parents. That Mehta senior would unburden himself to his biographer son is almost a foregone conclusion. What's unclear, though, is the effect this knowledge will have on their relationship. Son must accept a new version of his father. No longer an even-tempered, optimistic gentleman, he's become a passionate, moody romantic. Mehta's notions of his mother also need revising. It's a "belated growing up," yes, but also a fitting conclusion to his Continents of Exile series. Mehta fans will find this 11th and closing volume enticing, and newcomers may be inspired to restart with volume one.