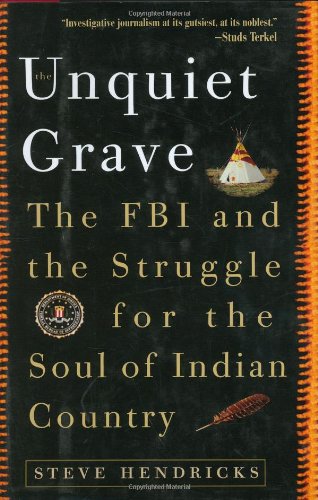 The Unquiet Grave: The FBI and the Struggle for the Soul of Indian Country

Investigative journalist Hendricks significantly updates the story of the American Indian Movement (AIM) to reclaim civil and treaty rights, which has been generally underreported and lacked substantial book-length treatment since Peter Matthiessen's (1983). Bracketed by the 1976 murder of AIM activist Anna Mae Aquash and the 2004 trial related to it, Hendricks's swift narrative is riddled with judicial travesties, coverups, vigilantism, COINTELPRO-style tactics, mounting paranoia and lawlessness on both sides, as activists and ordinary American Indians confront the devastating neglect and outright hostility of government authorities. Based on reams of newly released official documents (many the result of the author's own Freedom of Information Act lawsuits) and interviews with many surviving actors and witnesses, the book's committed journalism doesn't leave its sympathies in doubt, while also holding AIM's militants responsible for their actions. Hendricks is careful throughout this harsh, heart-thumping account never to lose sight of the larger context. "Aquash," he persuasively reminds us, "was murdered because the government of the United States waged an officially sanctioned, covert war on the country's foremost movement for Indian rights."