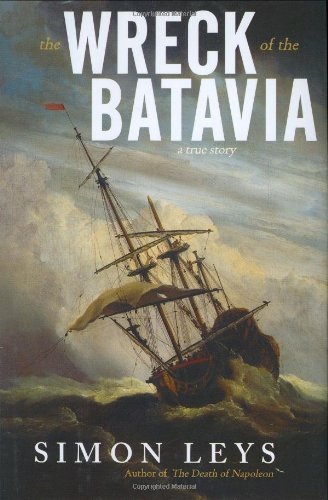 The Wreck of the Batavia

This lackluster hybrid by novelist Leys ( ), a winner of France's Prix Femina, consists of two undernourished essays. The title piece summons the shipwreck of the a vessel of the Dutch East India Company that in 1629 smashed up on a coral archipelago en route from the Netherlands to Java. Leys came up with the idea to write about the shipwreck more than 18 years ago, but never put pen to paper until after the 2002 publication of Mike Dash's , which "hit the bull's eye and left me nothing more to say." Nevertheless, the author adds his two cents as he details how a psychopathic crewmember instituted a reign of terror resulting in the slaughter of 200 of the 300 castaways in the three months it took a rescue ship to arrive from Java. The second essay, "Prosper," documents the author's experience more than 45 years ago aboard a Breton tuna-fishing boat. It's a hardscrabble life for the close-knit crew, including an aging skipper who recaptures his youth at sea; an alcoholic who views his mates as one large family; and a 62-year-old survivor of throat cancer and his dutiful, depressive nephew who hangs himself not long after the voyage. Illus.