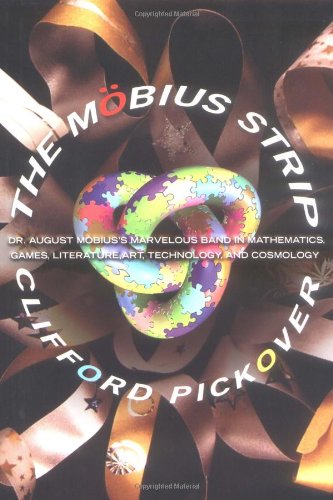 The Möbius band is a puzzlingly twisted strip of paper joined at the ends with, remarkably, only one side. It was discovered separately in 1858 by German mathematicians August Ferdinand Möbius and Johann Benedict Listing. As Pickover ( ), a prolific science author and former columnist, tells us, today Möbius's strip is everywhere: it forms the familiar recycling symbol; freestyle skiers attempt a stunt called a "Möbius flip"; and it appears in the works of artists like M.C. Escher and writers like Arthur C. Clarke. Pickover uses the strip as a jumping-off point for a wide-ranging exploration of objects that are "chiral" (objects that are mirror images yet cannot be superimposed on each other) or have unusual properties of continuity. His travels take us from Earth, where he describes patented contraptions that incorporate the strip (a conveyor belt being one of the most successful), to the outer reaches of space, explaining some very strange topologies that have been theorized for the universe. Pickover is less successful in his forays into literature and the arts, and at times he wanders far afield. Readers who enjoy recreational mathematics à la Martin Gardner will get much pleasure from this inviting book. B&w illus.