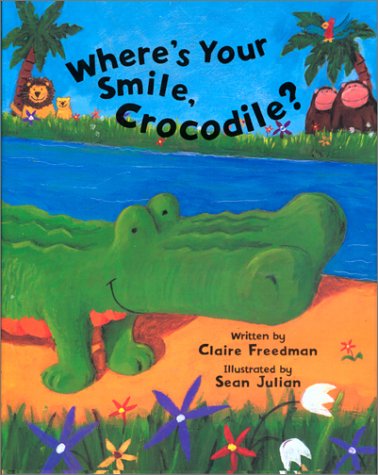 Young Kyle the crocodile has lost his smile. "Why don't you go out and play? You'll soon find it again," says his mother. But nothing works, even though British artist Julian's acrylic-rendered jungle brims with flamboyant hues and Kyle encounters a triumvirate of animal hilarity: a screeching scarlet and sapphire parrot, an orange monkey with a repertoire of funny faces and a huge pink elephant who can squirt a fire-hose worth of water from its trunk. Freedman () even provides the trio with vivid sound effects ("Burble! Burble! Burble!" blasts Elephant, blowing bubbles in the water). But when Kyle stumbles upon another curmudgeon in the form of a lost lion cub, he not only expertly runs through all the comedy tricks learned from his animal neighbors, he also reunites the cub with his mother. Freedman and Julian's lesson of finding joy by stepping outside one's own troubles isn't new, but it's lightly proffered and colorfully imagined. Ages 2-6.