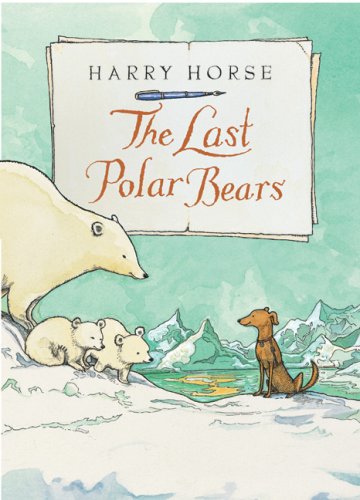 In this amusingly quirky chapter book, the late Horse (the Little Rabbit series) tracks an oddball expedition to find polar bears at the North Pole. Comprised of letters a grandfather sends to his grandchild, the story starts aboard a creaky ship (the ), which carries him and his opinionated talking dog, Roo, from Aberdeen to the town of Walrus. Grandfather’s missives describe storms at sea, a malfunctioning engine that Roo inadvertently fixes and Roo’s farfetched yarns about her own seafaring grandfather (“She told us one in which he was swallowed by a whale and lived inside it for two years,” writes Grandfather. “He at last escaped by climbing out of the blowhole, and swam all the way back to his ship. He later got a medal for it”). On land, the two encounter drunken wolves, a loner who makes animal sculptures from snow and an Arctic-dwelling penguin whom Grandfather adopts—all before the bear-seeking mission begins. Horse’s droll wit extends to his delicate pen-and-ink illustrations, which keep the spotlight trained on the emotive Roo and her animal co-stars. Ages 6-10.