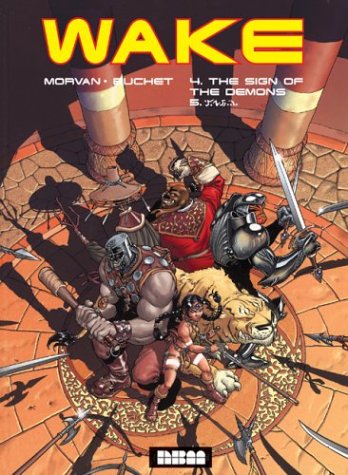 Morvan and Buchet offer a full-color sci-fi volume containing two stories, both dealing with the Wake universe, a convoy of spaceships from various civilizations seeking new planets to inhabit. On one planet the Wake explorers discover a human girl, Navee, who was abandoned and raised by robots. The convoy takes Navee on board and trains her. Acting as Wake's special agent, Navee is front and center in both stories. During the first, she sets out for the planet of Hurumaru, which resembles medieval Earth and discovers the Escots, a nation of serfs revolting against their world's dominant races. In the second story, the Ftross, a people oppressed in the convoy, begin committing terrorist acts as a way of retaliating, and eventually take Navee as a hostage. In this tale, Morvan sympathetically portrays the Ftross. He seems to want to create a greater understanding for our planet's neglected populations in the process, as well as for the inhabitants of Wake, a United Nations of space travelers. This work will mostly appeal to teenagers—like Navee, who appears to be about 16. She's tough but compassionate, as her understanding of the Ftross illustrates. Morvan also injects humor into his stories with good-natured antagonism surfacing among the convoy's inhabitants, including between Navee and her assistant, Snivel. Buchet's artwork consistently impresses; his somewhat cartoony, detail-filled style draws on European and American influences. The draftsmanship's neat, precise quality and vibrant coloring, and the book's large size, which allows 10 or 12 panels to fit easily on a page, help the story move briskly.