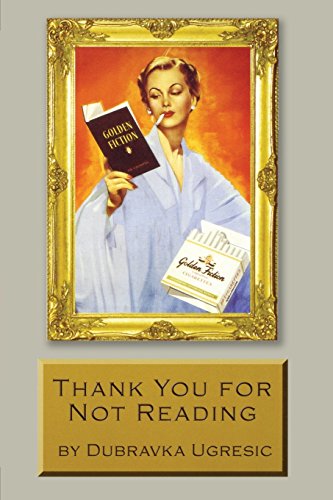 THANK YOU FOR NOT READING: Essays on Literary Trivia

In the bustling Anglo-American literary marketplace, the Eastern European exile doesn't stand a chance, says Ugresic (), herself in self-exile from Croatia. "The literary market demands that people adapt to the norms of production. As a rule, it does not tolerate disobedient artists, it does not tolerate experimenters, artistic subversives, performers of strange strategies in a literary text." Instead, it rewards the artistically obedient. Furthermore, Ugresic complains, literature has lost the exclusiveness it once had. Since the market determines what is good and what is bad based purely on what sells, the door has opened for every two-bit celebrity to hock their wares in mega-bookstores, leaving "real" writers out in the cold. The author compares herself to Eeyore, the famous grumbler, but the tone of this collection can be fickle—is the author playfully grumbling or bitterly mocking? In "GW, the Gloomy Writer" and "The Magnificent Buli," she mocks two types who have entered the global literary market: the male Eastern European writer with an inferiority complex and the genius/literary bulimic. In another piece, Ugresic playfully decries a marketplace that allows an empty personality like Ivana Trump to become a published author. At times, the analysis focuses so intently on the superficial business of marketing books that it overlooks the quiet intellectual activity that energizes English departments all across the United States, those little enclaves where Ivana Trump's output makes nary a ripple. And since an academic audience frustrated with the commodification of books is the primary target for these essays, that feels like a significant omission.