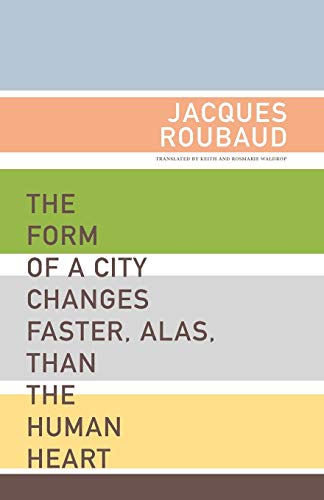 The Form of a City Changes Faster, Alas, Than the Human Heart

In this hefty collection, renowned octogenarian novelist and poet Roubaud sets about capturing the city of Paris through a catalogue and discussion of its history, literature, landmarks and streets. Roubaud is a member of the Oulipo group of experimental writers, whose members have included Raymond Queneau and Italo Calvino. The best of these poems breathe new life into this storied city. Roubaud's memorable description of the Eiffel Tower revivifies the clichéd landmark: "A dense crowd amble in the area your four legs straddle/ and gawk up at your nether parts... children are not banned and will go back directly to our countryside and dream, perverted ever after." Notable, too, are the "Six Little Logical Pieces": "—But I'd like/ to think truth/ here and now/ not think of anything/ in this floating world/ this fallible world/ this rotten plank of a world." At times, this detailing of the minutiae of Paris falls flat, as in the poem "License Portrait of Paris 1992," quite literally a list of Paris license plates—though preserving the city in this manner is perhaps part of the point. A thoughtful appendix of notes clarifies references and connections to French literature throughout.