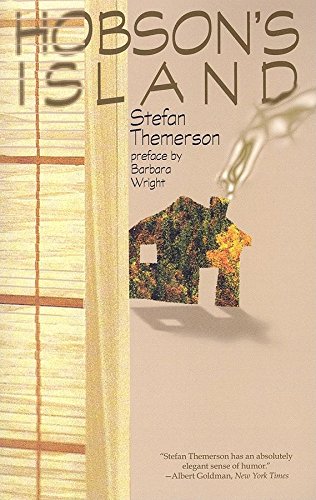 A small refuge against modernity gets overtaken by history in this meditative fable of ideas. The legacy of an eccentric American billionaire who deeded it to a philanthropic Swiss trust, tiny Hobson's Island in the eastern Atlantic is inhabited only by a caretaker family and their cow. But, like any Hobson's choice, the island's opt-out alternative proves illusory. Decades of idyllic isolation end when representatives of imperialism and the military-industrial complex descend on the island: an exiled African dictator, his handlers in British intelligence, French agents assigned to keep an eye on the British agents, a descendant of the island's original owner who intends to turn it into a resort or an American naval base, and scientists seeking a testing ground for a germ-warfare experiment. Published in the U.K. just before Themerson's death in 1988 (this is the first American edition), the novel has a distinctly pre-1989 feel, with an apocalyptic mood lit by flashes of absurdist humor and a slightly dated concern with Cold War–style power intrigue. But the geopolitics are secondary to Themerson's preoccupations with ethics, religion, science and the impossibility of representing reality in language, which he often explores through characters' ruminative streams-of-consciousness. Fortunately, the novel's engaging story, sympathetic characters and rueful tone help lighten its philosophical weight.