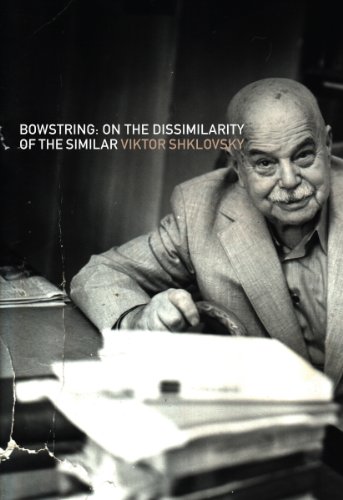 Bowstring: On the Dissimilarity of the Similar

Available in English for the first time, this title, first published in 1970, is another impressive addition to the Shklovsky oeuvre. Shklovsky (1893%E2%80%931984), a giant of Russian Formalism, (Theory of Prose), focuses on innovation in art%E2%80%94what it means and requires. To Shklovsky, an "innovator is a guide who changes the tracks but who also knows the old pathways," and he surveys history and the present moment to identify those crucial points where innovation occurs, when "the similar turns out to be dissimilar." He revisits and revises his concept of ostranenie (estrangement), contemplates the work of artists from Tolstoy to Stravinsky, examines the structures of myths and fairy tales. He also revives the work of such colleagues as Boris Eichenbaum and Yuri Tynjanov, so that the book becomes both an homage to and a collaboration with his friends and muses. His mind moves like a lasso, pulling literature, film, painting, architecture, music, and characters as diverse as Charlie Chaplin and Albert Einstein into his argument, so that the book becomes a place of reckoning and revision, crammed with life and a life's worth of thought. Shklovsky's prose is not strictly academic, nor is it immediately accessible. Like his previous books, it requires patience and surrender, and for thinkers and lovers of language, the devoted or the curious, the surrender is, once again, worth it. (July)
close
Details