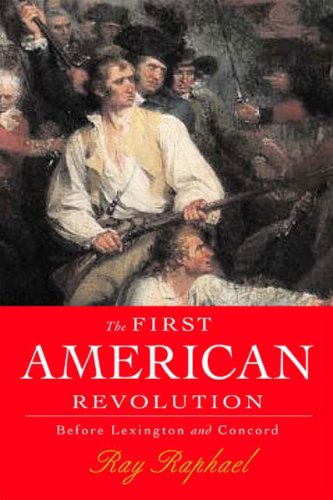 THE FIRST AMERICAN REVOLUTION: Before Lexington and Concord

Historian Raphael contends that the United States' war for independence did not begin in April 1775 with the "shot heard round the world." Rather it began the previous summer in rural towns like Worcester as patriots forced royal appointees to publicly resign their offices. These actions brought to a standstill the courts and public bodies established under the Massachusetts Government Act. The thousands of farmers and artisans then reclaimed the Charter of 1691 to democratically reopen the courts, establish new governmental bodies and organize a network of militias. Raphael thus brings into clear focus events and identities of ordinary people who should share the historic limelight with the Founding Fathers. This successful rebellion has until now remained obscure, the author says, because "[t]he telling of history cries out for individual protagonists" while this revolution was decentralized and nonhierarchical, creating not leaders but a participatory democracy that, in Raphael's view, "far outreached the intentions of the so-called 'Founding Fathers.'" Moreover, unlike Lexington and Concord, this revolution involved no dramatic shedding of blood. Whether or not "the transfer of political authority to the American patriots" in 1774 was the "real revolution"—making the clash in April 1775 a British counter-revolution to regain lost territory—Raphael () makes a compelling case that these early events were critical to the success of the war that followed and should no longer escape our notice. His liberal use of primary sources (excerpts from town records, newspapers, letters, etc.), authoritative secondary sources and his meticulous care in footnoting will prove extremely useful for further study.