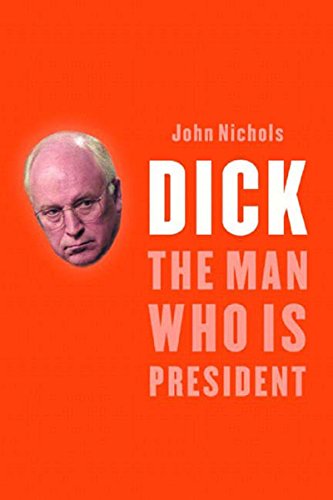 DICK: The Man Who Is President

That George W. Bush is a bumbling "president in name only" and that Dick Cheney holds the real power in the administration is a familiar position, and Nichols, Washington correspondent for the , takes it with an unsubtle, repetitive hammering of its main features. Righteousness colors otherwise compelling, in-depth considerations of matters such as Cheney's evasion of military service during the Vietnam War and his archconservative voting record as a congressman. Nichols has a lot of cogent and well-collated material about his subject's "hustling for power," both in Washington and as the CEO of Halliburton, but he occasionally overreaches, as when he suggests that then-secretary of defense Cheney's pressure to maintain military spending levels after the end of the Cold War shaped the rise in terrorist activities leading up to 9/11. In addition, overlong sidebars derail the main argument, at times adding little more to the debate than petty sniggering over the future vice-president's poor college record and his wife's lesbian romance novel. But at his best, Nichols asks tough questions that went largely unanswered during the last presidential election.