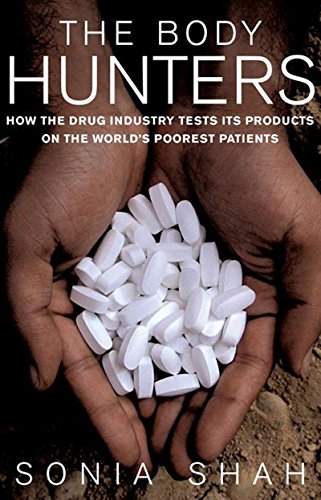 The Body Hunters: How the Drug Industry Tests Its Products on the World's Poorest Patients

In a trenchant exposé of a sinister new trend in the pharmaceutical industry, investigative journalist Shah ( ) uncovers a series of recent unethical drug trials conducted on impoverished and sick people in the developing world. Intricately delineating the causal relationships between past drug scares in America, such as thalidomide, and Americans' consequent reluctance to take part in drug testing, Shah demonstrates how a skyrocketing drug market has accelerated the search for "warm bodies" on which to test new products. Saying that the drug industry's main interest "is not enhancing or saving lives but acquiring stuff: data," Shah focuses in particular on the habitual use of a placebo control group, who receive little or no medical care. Shah concludes by spotlighting how drug regulators turn a blind eye to "coercion and misunderstanding between subjects and researchers," and how researchers actively seek countries that can provide them with a high death rate, so crucial to their data. Meticulously researched and packed with documentary evidence, Shah's tautly argued study will provoke much needed public debate about this disturbing facet of globalization.