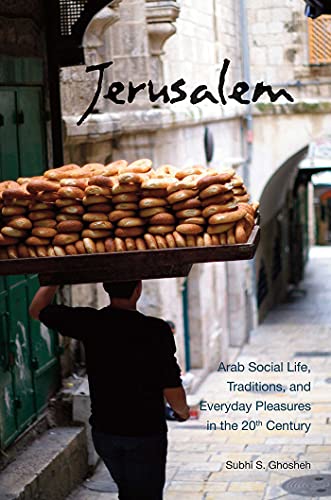 Idyllic folklorist fantasy blended with childhood memoir meets anti-Israeli and anti-modernization sentiments in this guide to the Arab traditions of Jerusalem, from the ancient Canaanite and pre-Ottoman periods through the British Mandate, the 1948 declaration of Israeli independence, and the 1967 occupation of the West Bank and Gaza, to today. Covering birth, marriage, and death, household structure and family, gender roles, food and games, and folk medicine, superstitions and religious festivals, Ghosheh, a member of the Palestinian National Council, paints a picture of a traditional Jerusalem in which "good human and ethical habits" yield a community of social cooperation where Palestinian Christians and Muslims lived in peace. Ghosheh argues that in modern times, Arabs have been "deprived not only of our country, but many of our traditions," as narcotic use, juvenile delinquency, begging, and depression are on the rise, schools are "brainwashing the pupils to accept the Israeli narrative," and infants "may already be able to decipher the jargon of economics, occupation, and violence." For the readers who agree with Ghosheh, this book is needed because "indigenous Arab identity... is being obliterated" by Jews. Readers may find Ghosheh's presentation of the quaint harmony of pre-Israel Arab culture both historically dubious and the book's anti-Semitic sentiments troubling. Photos. (Feb.)
close
Details