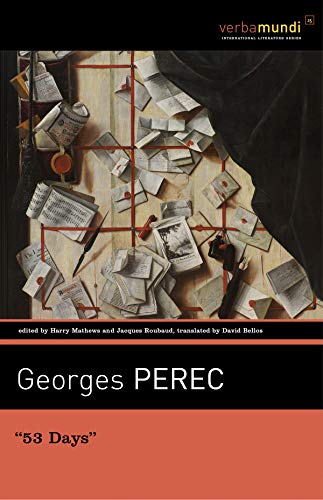 Perec (Life, a User's Manual) had finished 11 of his planned 28 chapters in this murder mystery at the time of his death from cancer in 1982. Distinguished colleagues and fellow novelists Mathews and Roubaud, guided by Perec's voluminous notes and drafts, assembled this version of his complex literary thriller in 1989. Now translated into English, this novel/puzzle is an intellectual dragnet whose narrator is called upon by the French Consul to unravel the mystery of the disappearance of famous French crime-writer Robert Serval. The narrator must investigate in secret, armed with only a briefcase containing Serval's manuscript, called ""The Crypt,"" which contains a story of love, murder and secret codes, set in the freezing Nordic country of Fernland. The narrator, meanwhile, lives in fictional French Grianta, a region of blisteringly hot weather. The collection of puzzling clues, which he decodes, recombines, and cross-references, are full of literary puns, acronyms, palindromes and equations. Conceived of in Chinese boxes, this novel leans heavily on its many references. The narrator and the reader are often abruptly referred to the works of Agatha Christie and Andr Gide; and the title itself reflects the time it took Stendhal to write The Charterhouse of Parma. The narrator may or may not be distinct from author Perec, just as the framing novel may mirror, foil or illuminate the mystery of ""The Crypt."" By the end, Perec/the narrator has decided upon a solution, not to be confused with the truth, which, ""barely touched upon, recedes into the distance."" While the linguistic brainstorm, complete with its unorthodox format and formulae, may baffle, fans of Perec (who wrote his novel A Void completely omitting the letter ""e"") should anticipate that the ""just the facts, ma'am"" mode of detective novels will be ingeniously frustrated in his last work. (Sept.)
close
Details