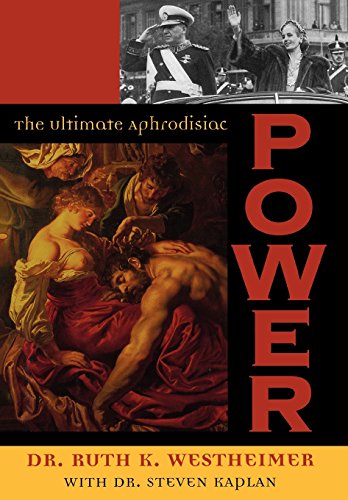 After authoring countless sex manuals, therapist Westheimer (aka Dr. Ruth) has joined forces with Hebrew University professor Kaplan to explore a slightly more academic (yet still bedroom-related) issue—the correlation between sex and power in history. It's a big subject, but that doesn't faze Dr. Ruth, who joyfully delves into the stories of vengeful Old Testament women, harem and concubine women, trophy wives, political marriages, famous mistresses and celebrities from J.F.K., Aristotle Onassis and Eleanor Roosevelt to Cleopatra. While public interest in the prurient details of these figures' lives may be deplorable, that doesn't stop Westheimer from dishing the dirt herself (e.g., her description of Catherine the Great's alleged death, which involved attempting intercourse with a horse). Were this a simple anthology of sexy anecdotes, it might have worked. But instead, Westheimer has cornered herself into drawing a mature conclusion from each of these stories. So the Bible's Ruth secures her future by seducing Boaz, and according to Westheimer, that is not to say that "the end justifies the means"—just that all sorts of relationships "have the potential for fulfillment and fruition." If Jefferson did sleep with Hemings, well, that just "humanizes" the president. By the end of the book, Westheimer concludes that history does not show much connection "between power, people's sex lives, and their political or economic successes," although readers may be too confused by then to even notice. For Dr. Ruth fans—who are legion—only. 16 photos and illus. not seen by .