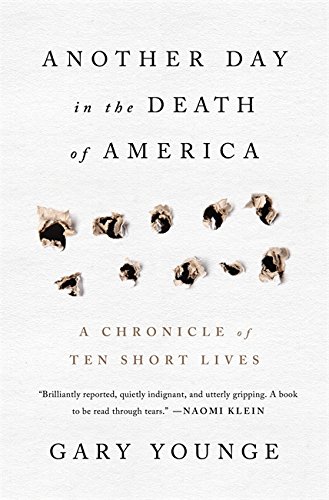 Another Day in the Death of America: A Chronicle of Ten Short Lives

Guardian journalist Younge (The Speech) chronicles the shooting deaths of 10 children and teens on a random Saturday in 2013 to illustrate the capriciousness of gun violence in America. The circumstances vary: one child is a victim of a domestic dispute; two were shot by friends playing with firearms; one was a known gang leader. While one shooting “tore at the very fabric of [a] tight-knit community,” another elicited only an 81-word mention in the newspaper. Younge explores each incident in terms of its location, from the San Jose, Calif., enclave of the Nuestra Familia gang to rural Marlette, Mich., where hunting is popular. He discusses the flawed gun control narratives that require the “elevation and canonization of ‘the worthy victim’ ” to engage the public’s sympathy, and critiques the NRA’s lobbying practices as corrupt. He further castigates the entrenched racism and poverty that keep young African-Americans mired in a cycle of violence. Drawing from insights from community organizers and scholarship on violence, economics, and psychology, Younge provides nuance and context to a polarizing issue. The personal touches, however, are most affecting, as Younge pieces together each story from news reports and interviews with friends and family, weaving a tragic narrative of wasted potential. Agent: Frances Coady, Aragi. (Oct.)

This review has been corrected to reflect the correct agent for the book.