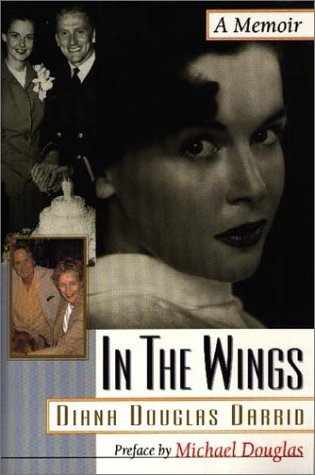 In the Wings: A Memoir

Born Diana Dill to a privileged family in Bermuda in 1923, Darrid, the mother of actor Michael Douglas and former wife of Kirk, writes that she acquired an ""English schooling reticence"" during her teens. Indeed, an admirable reserve and dignity characterize this memoir. Working as a Powers Agency model, she graced the cover of Life in the early 1940s. She met Kirk Douglas in New York City, and although their subsequent marriage resulted in two children, Michael and Joel, it ended quickly. They separated in the early '50s as he rose to fame on the strength of Champion (1949), while she played a supporting role in Joseph Mankewicz's House of Strangers (1949). She later married the actor-producer-novelist Bill Darrid; they remained together for 37 years until his death in 1992. Her own career was prolific if not stellar, including a dozen movies, live television, Broadway (Edward Albee's Everything in the Garden) and several stints as a regular on Days of Our Lives. Darrid tells anecdotes well, amusingly relating how her car broke down on a deserted California highway 20 minutes before curtain time, and how the actor Murvyn Vye, unable to handle screaming directions from Otto Preminger, became ""trembling and incoherent"" on stage. As one might expect, a host of celebrities make cameos, but Darrid does not linger on them. Even her friend, the ""charming and funny"" Brenda Vaccaro, and her son, Michael, appear on only a few pages. While readers may regret having their curiosity aroused and not sated, Darrid should be praised for keeping her priorities straight and her focus on her own story. 16 pages of photos not seen by PW. (July)
close
Details