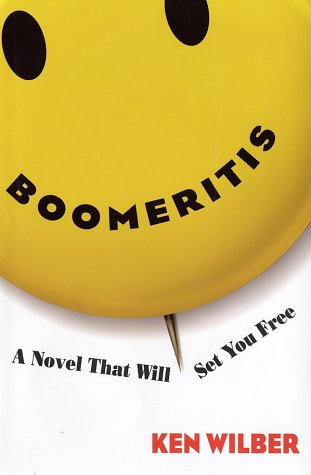 BOOMERITIS: A Novel That Will Set You Free

Wilber () shifts (sort of) from philosophy to fiction in this story about a young MIT grad student's journey to self-discovery, which is finally little more than a thinly veiled attempt to outline and promote a theory of consciousness. Dubbed Ken Wilber, just like his creator, the novel's protagonist finds answers in his search for identity when he attends a series of consciousness lectures at an institute called the Integral Center. There, Wilber is exposed to an eight-level theory of consciousness and buys into the lecturer's premise that baby-boomers made the first step into higher awareness before they got "stuck" in their own narcissism and self-absorption, leaving it to subsequent generations to take things to the next level. Wilber makes a halfhearted effort to inject some plot elements as he tracks his friends' romances and their reaction to the theory, but most of this book is a lengthy rant about the shortcomings of boomers, padded with analysis of various thinkers, political movements and the effect of computers on modern thought. Wilber (the author) has some interesting ideas but, philosophical issues aside, this isn't much of a novel, and Wilber's failure to develop a coherent narrative, some semblance of a plot or interesting characters will deter many readers.