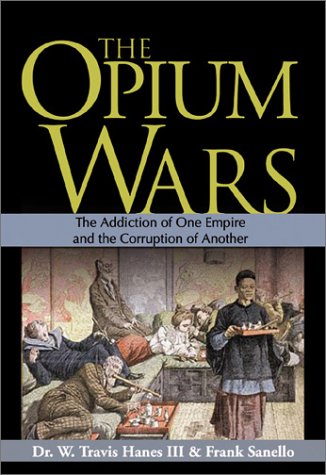 THE OPIUM WARS: The Addiction of One Empire and the Corruption of Another

Hanes () and film author and former critic Sanello have teamed up to produce this fine popular account. Beginning in the 18th century, British merchants quickly discovered that by introducing high-quality opium into China, they could earn high profits and use the hard currency to buy more tea. As a result, Chinese society became inundated with opium, and more and more people, including much of the army, became addicted. Twice, from 1839 to 1842 and again from 1856 until 1860, the Chinese government sought to oust the British trade. Hanes and Sanello describe in detail the military operations of both wars, the few Chinese successes and inexorable British wave of victories, culminating in the 1860 sacking and looting of the Imperial Summer Palace and its sumptuous works of art. The opium saturation of China continued until the post-WWII communist takeover, when the Maoist government banned opium, executed dealers and weaned the country (perhaps 10% of the population was addicted) off the drug with progressive rehab programs. The book covers a familiar time and place in history, but the authors make some nice analogies between the brutal economics and empire of the 19th century, and 21st- century forms of money, politics and war.