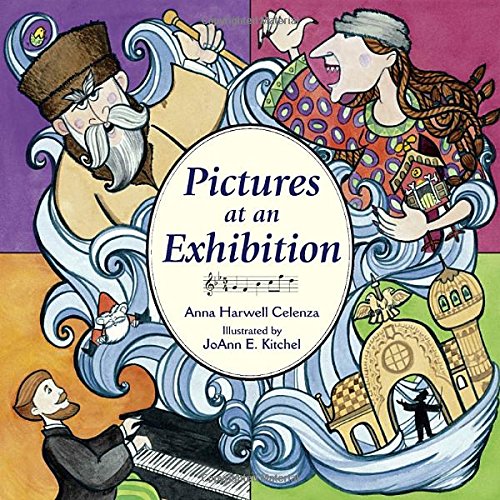 PICTURES AT AN EXHIBITION

Celenza and Kitchel () once again reprise a segment of music history for the grade-school crowd. This story, set in 19th-century Russia, details the pivotal friendship among composer Modest Mussorgsky, architect Victor Hartmann and art critic Vladimir Stasov. Mussorgsky sinks into despair at Hartmann's sudden death, which he overcomes only when he visits a memorial exhibit of more than 400 of Hartmann's works. Mussorgsky, inspired by the drawings and paintings, composes the titular piano suite. While the length of the text serves the target audience, Celenza sometimes oversimplifies both the language (e.g., "Victor dreamed of decorating his homeland with fantastic towers and gates") and the storytelling (" 'The Great Gate of Kiev' [a picture] stirred Modest's soul. 'Oh Victor,' he sighed, 'This was to be your greatest achievement—a glorious monument to heroic Russia and almighty God!' "). Kitchel demonstrates Mussorgsky's creative process in showing characters and scenes from Hartmann's work (e.g., Baba Yaga, canary costumes designed for a ballet, a whimpering beggar) emerge from Mussorgsky's piano on flowing blue waves. However intriguing the conception, the execution pales: the figures verge on the cartoonish, and the colors—orangey pinks, gaudy purples and yellow greens—vibrate discordantly. The illustrations seem pitched to an audience younger than the sophistication suggested by the text's themes. A CD of piano and orchestral versions of the piece is included. Ages 8-11.