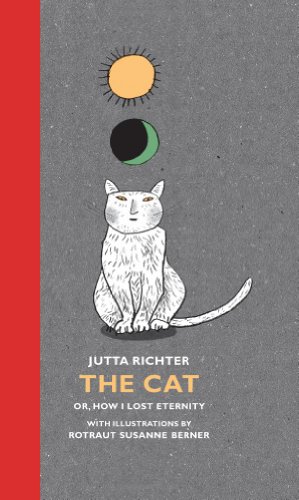 The Cat: Or, How I Lost Eternity

Richter’s ( ) novella starts like a tender fantasy in which an animal offers comfort and companionship to a lonely child, but it takes a darker and more sober turn. Christine seeks out the old white cat when her teacher calls her willful and her parents scold her for laziness. “Every animal is free and strong at the beginning,” the cat tells her, “and the world is always a wonder.” When the principal punishes her with two hundred lines to write—“There are no talking cats and in the future I will come to class on time”—she feels sure “that something—a secret. a spell—would come to an end. I would lose eternity if I wrote those words.” Eventually she realizes she can omit the word “no,” and, in fact, no one notices. Gradually, though, Christine sees that the cat’s freedom amounts to an absence of pity (“It’s his own fault,” it sneers about a neighbor’s lonely dog. “He licks the hand that beats him instead of biting it”); its corrosive scorn runs contrary to Christine’s compassion. (“You must protect him,” Christine finds herself feeling about the class pariah. “He’s all alone.”) Richter has an uncanny gift for illuminating the weight of small actions; it’s not too much to read the book as an allegory of good and evil in the postmodern world. Berner’s two-color drawings, the slender trim size and the eye-catching printer-board covers confer, appropriately, a smart downtown look. Ages 8-up.