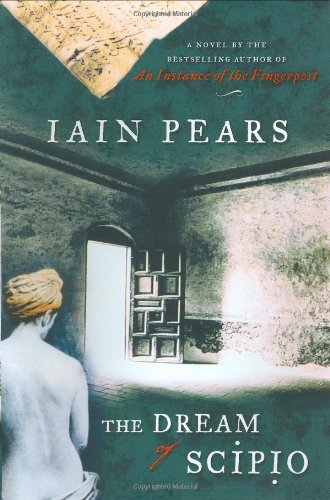 THE DREAM OF SCIPIO

Critic Harold Bloom once opined that literature is a series of misprisions, or misreadings, by writers of their predecessors. Although Pears might not have had Bloom in mind in his latest novel, the premise is an unlikely embodiment of Bloom's thesis. The story unfolds in three time frames, in each of which a man and a woman are in love, civilization itself is crumbling and Jews become the scapegoats for larger cultural anxieties. In the first scenario, Manlius is a wealthy Roman living in Provence in the empire's crepuscular 5th century. Although he has received the last echo of Hellenic wisdom, he is surrounded by believers in a nasty sect he despises—Christianity—but must find some means to protect Provence from the barbarians. In fighting for "civilization," he becomes a bishop and the promoter, almost accidentally, of one of the West's first pogroms. In the next narrative time period, a manuscript of Manlius's poem, "The Dream of Scipio," a neo-Platonic allegory, is discovered by Olivier de Noyen, a Provençal poet of the 14th century. As his 20th-century interpreter, Julien Barneuve, discovers in investigating his violent death, de Noyen was attacked because he got caught up in a political intrigue in Avignon while trying to save his love, Rebecca, from a pogrom unleashed by the Black Death. Barneuve, Pears's third protagonist, has a Jewish lover, too, but is enmeshed in the racist policies of Vichy France. Pears has a nice sense of what it means to live in a time when things fall apart, and not only the center but even the peripheries will not hold. But the readers who flocked to might not find the pages turning so fast in this less mystery-driven outing.