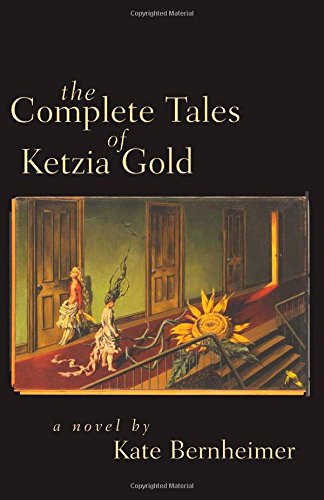 THE COMPLETE TALES OF KETZIA GOLD

Flitting into a state resembling madness, the protagonist of this unconventional debut snips the story of her life into a strip of patchwork pieces, alternating vignettes with retellings of German, Russian and Yiddish folk tales. Ketzia Gold is the middle of three sisters, the most difficult and prone to flights of fancy ("for a short but rather confusing time when I was younger, my sisters and I turned into flowers"). She sleeps in the dog's bed and hides out at the library, but other people tell her she is clever and pretty, and Adam Brown, the smartest boy in her class at school, wants to marry her. When they grow up, they do marry, and for a while they are happy together, Adam working as a department store pianist and Ketzia as a transcriptionist for the Triple D detective firm. But their happiness is not fated to last: first, Adam's twin sister, Abby, moves in, and Adam seems unnaturally fixated on her. Ketzia leaves abruptly, only returning when Abby finally goes away. Then, in a Bluebeard-like twist, Adam gives Ketzia a set of keys and tells her never to look in a certain hall closet. Of course, Ketzia is unable to resist and finds only a stash of innocent photographs. After a period of stumbling malaise, Ketzia leaves Adam again to wander alone in an unnamed hot Southern state. Narrated in a deadpan, childlike voice, Ketzia's story is a fragmented contemporary fairy tale, shaped only by the fluctuations of its protagonist's coy helplessness. It relies on the inventiveness of its language to charm, and while Bernheimer does manage a balanced mix of the absurd and the matter-of-fact, too many mangled phrases ("Ketzia launched two green eyes about the room") disrupt the effect.