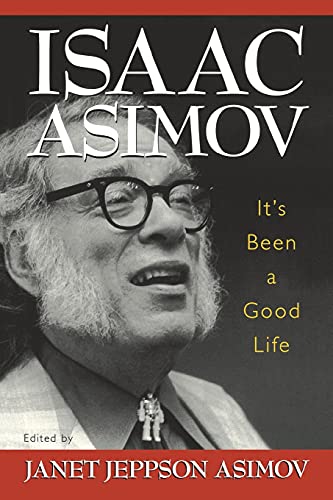 ISAAC ASIMOV: It's Been a Good Life

Condensed by Asimov's widow from the remarkably prolific author's three-volume autobiography, this fascinating but somewhat disjointed collection of excerpts conveys the exuberant spirit of one of the most celebrated founding fathers—and eighth Grand Master—of American science fiction, who died in 1992. As a child of Russian Jewish immigrants, Asimov gazed longingly at encyclopedias in more affluent friends' homes, and grew up to be a walking encyclopedia himself: a self-educated polymath and humanist, he earned a Ph.D. in chemistry and later received over a dozen honorary doctorates. Asimov's widow presents chronologically his thoughts on his writing in the context of his life and his lifelong secular humanism; she connects them with a minimum of editorial comment and occasionally adds illuminating passages from their previously unpublished private correspondence. Also included are a brief chronology of Asimov's life; his posthumous 400th essay "A Way of Thinking," which his wife assembled from their discussions and letters defending "Reason against Chaos"; Asimov's favorite among his multitudinous short stories, "The Last Question," which is quintessential Asimov in its spare, conversational style simmering with optimistic cosmic humor; and the surprising revelation that Asimov's 1992 death was caused by complications from AIDS, which he had contracted through blood transfusions during his 1983 bypass surgery. Generously exposing both Asimov's immense talents as a science fiction author and his ruefully amusing self-deprecating punctures of his own early inflated self-image, this readable and idiosyncratic self-portrait should attract a whole new generation of readers to Asimov's fine creative works. Photos. (