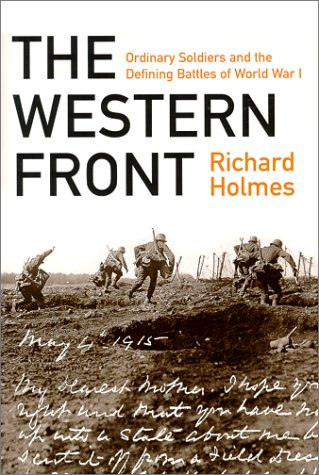 This book invites dismissal as a nonbook, since it is the accompanying volume to a television documentary on WWI for the History Channel, hosted by the author. It focuses only on the Western front, although several of the war's other theatersDRussia, Mesopotamia, PalestineDare discussed in an appendix. The British perspective is emphasized: Holmes (Acts of War, etc.) is a professor of military and security studies at England's Cranfield University and Royal Military College of Sciences, and writes for that country's audience; German and French experience receive correspondingly limited coverage. Yet among many recent outstanding works on the war, such as John Keegan's The Great War and Niall Ferguson's The Pity of War, this book, a U.K. bestseller, comes closest to depicting the conflict's essential nature in a limited compass. Holmes blends a clear familiarity with the subject and its literature with a sense of the English language that reflects years of careful writing. He is sympathetic to the problems of command in a war where the defense eclipsed the offense, and firepower overshadowed both mobility and protection. He pulls no punches in describing the consequences in the early battles of 1914 and 1915, where men were mowed down by machines guns, blown to pieces by high explosives and hung on barbed wire by the tens of thousands. Four years later, despite improvements in tactics and communications, despite the introduction of new weapons like tanks and aircraft and despite the arrival of the Americans, the Western front was never broken by either the Germans or the Allies. The ultimate reason, Holmes shows, was the everyday heroism of the men who held the line on both sides. Holmes reconstructs the daily routines of the trenches and the often raffish life out of the lines. He takes readers into the big offensives, the Somme and Passchendaele, where whole battalions disappeared in minutes, and on the raids and patrols that generated the everyday ""wastage"" of lives and bodies. World War I was the last war primarily fought by soldiers, but Holmes never forgets that the soldiers were civilians in uniform. They endured because they believed in their country's cause, or they held on from pride and for comradeship, from habit or from lack of alternatives. In the end, Holmes calls on readers to respect their sacrifice. His book helps us understand it. (July)
close
Details