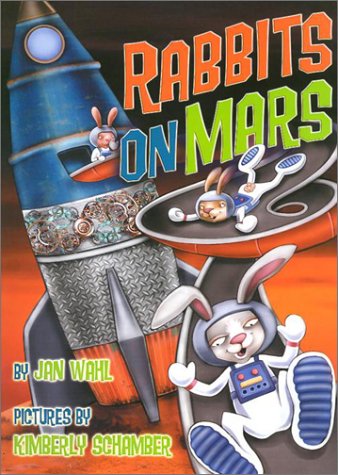 Longtime author Wahl (; ) and newcomer Schamber offer a flat tale about three rabbits disgruntled by life on Earth. After the trio's nocturnal dig for carrots proves fruitless, loud dogs chase them as they make their way home. Deciding that "life might be better" on Mars, the rabbits use a silo to build a rocket ship and blast off with the bunny named Greenleaf at the helm ("He was related to General Rabbit E. Lee"). On Mars, they discover "gigantic green dogs" wagging their tails and "colossal red carrots." The earthlings assume the best—that the pooches just want to play—which is true... sort of. The canines juggle the rabbits "for one whole week," then bat them with tennis racquets and, next, use the smallest rabbit as a bowling ball and the other two as pins. After distracting these Martian mutts by teaching them to jitterbug, the visitors race back to their rocket ship and gratefully return home. Yet, spying Jupiter in the sky, one of them wonders "what it's like there." At its strongest in scenes of space flight, Schamber's artwork offers some comical images, including the twin moons of Mars represented by photos of potatoes. But in many spreads, the juxtaposition of digital photographs with rather garish cartoon illustrations seems jarring. Readers likely won't wish to follow this troupe to Jupiter. Ages 3-8.