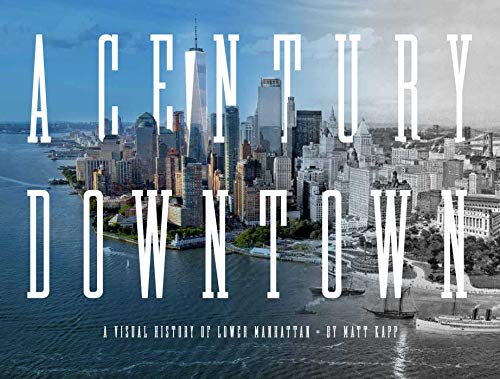 A Century Downtown: A Visual History of Lower Manhattan

In this informative visual history, documentary producer Kapp chronicles Lower Manhattan’s history from 1919 to the present using a vibrant collection of archival photos. Kapp demonstrates that throughout the years, one thing has remained constant: change. Images abound of the once vibrant Radio Row, the long-gone Washington Market, and Charlie Chaplin addressing crowds of thousands in front of what was then the U.S. Sub-Treasury building. The work also captures the controversies and tragedies, including the 1920 Bloody Thursday bombings on Wall Street, and the relocation of residents of what was in the 1940s a neighborhood called Little Syria, a “community of politically powerless city dwellers,” in order to construct the Brooklyn-Battery Tunnel. Kapp turns his attention to the aftermath of 9/11 and includes pages of haunting images of the Twin Towers and ground zero, as well as the area’s subsequent transformation and revitalization, with photos of the Oculus and the Freedom Tower. He closes the book with an essay on possible futures for Lower Manhattan—however farfetched—including draining the East River. Well researched, Kapp’s volume will thrill urban historians and those who call New York City home. (Feb.)

Correction: An earlier version of this review incorrectly stated the author is a TV producer.