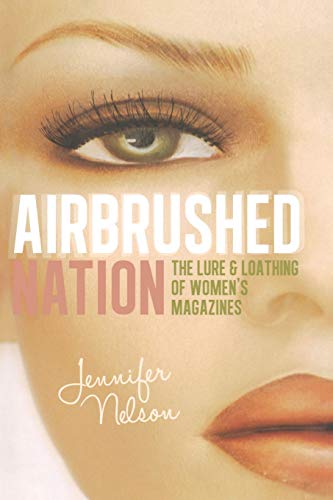 Airbrush Nation: The Lure and Loathing of Women’s Magazines

In her examination of the pitfalls and positives of the industry, journalist Nelson skillfully presents a damning report on how “chick slicks” use fear, subliminal advertising, and mixed messages about female empowerment to manipulate women, but in particular young girls, setting up lifelong struggles with self-esteem and body image. This wasn’t always the case, with the earliest publications, dating back to the late 18th century, offering prose, household advice, and foreign news. But with the Depression and following WWII, content and ads shifted, presenting females as housewives and sex objects needing to hold onto their youthful looks and men. The message shouted on cover after cover has become “we need self-improvement; we’re not good enough as is, but we can be” if only women pore over the latest issue. And what could make them feel better, Nelson writes, are the beauty and diet products pushed on the glossy pages, products that not coincidentally have profits of more than $40 billion annually, highlighting the ethically challenged relationship between editors and advertisers. Of course, these publications are not devoid of valuable articles, often taking the lead in publicizing national concerns such as domestic violence, reproductive health, and breast cancer, and highlighting women who are making substantive differences in their communities. At a minimum, Nelson effectively argues, these magazines should be read with a grain of salt, and that instead of buying into a dubious bill of goods about their worth, women should be feeling the kind of outrage that results in media campaigns and lost subscriptions. (Nov.)
close
Details