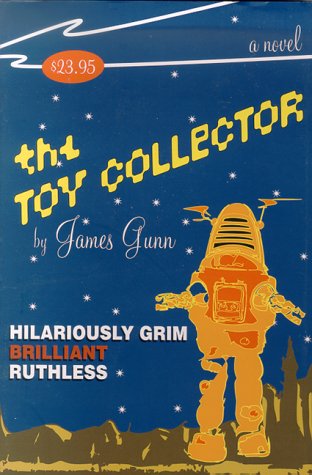 In the summer of 1995, a 25-year-old orderly named James Gunn starts pilfering drugs from New York City's Saint Dominic's Hospital to finance his addiction to buying the retro toys he loved while growing up in St. Louis. When he's not on one of his frequent, blind-drunk benders, having sloppy sex with random women, Jimmy basks in the magnificence of Charlie Barlow's antique toy store, where he spends thousands of dollars on TV paraphernalia, action figures, robots and games, in an attempt to recapture the few moments of beauty in his mostly horrifying childhood. Jimmy and his younger brother, Tar, survived delusional parents, cruel peers and the suicide of one of their friends by sticking together, with creative violence and wit. Those moments, sensitively told in flashback without the burden of sentimentality, often involved the boys' favorite toys, like Scrunch 'Em, Grow 'Em Dinosaurs. His pack growing up included Tar; Gary Bauer, the awkward misfit; and Nancy Zoomis, who played ""I'll show you mine"" with Jimmy. As the Gunn brothers matured, Tar became responsible and respectable, able to cope with his rage and bitterness about his parents and about society. But Jimmy is still an immature wastrel, who gets blotto daily and has tantrums that ruin his intimate relationships. As Jimmy attempts to heal old wounds by recollecting his painful past, he must face what his toy collection represents: a nostalgic coverup for his life's disappointments, a ""longing for innocence"" to quell his ""rage and sadness."" Author Gunn succeeds at the tough task of making Jimmy an engaging protagonist, and the hero is indeed alive, pathetic and witty. Readers will root for this outrageous loser because Gunn has given him a hilarious personality that shines through his misery and despair. (May) FYI: Gunn wrote the script for the forthcoming movie, The Specials, and stars in the film along with his brother, the actor Sean Gunn.
close
Details