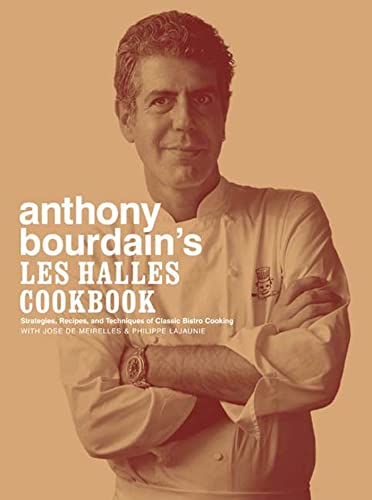 A celebrity with a high-profile position as executive chef at New York bistro Les Halles, and bestselling author of and , Bourdain doesn't intend to break new ground. The dishes do exactly as the subtitle notes and include such solid classic fare as Onion Soup Les Halles, Steak au Poivre, Boeuf Bourguignon, Coq au Vin and Chocolate Mousse. Nearly all recipes are within reach of competent home cooks, and those that are more complicated or time-consuming—Bouillabaisse, Cassoulet and Roulade of Wild Pheasant—are thoroughly spelled out to calm most jitters. Foie gras, duck fat and dark veal stock are frequent components, but a list of suppliers makes just about every ingredient available. Even though many of the dishes can be found in other cookbooks, what sets this one apart is Bourdain's signature wise-ass attitude that pervades nearly every recipe, explanatory note and chapter introduction. Profanity adds frequent color. If Aunt Doris would blanche at pearl onions being called "little fuckers," a cook who prefers boneless meat in Daube Provençal a "poor deluded bastard," or a person nervous about making these recipes a "dipshit," this book is not for her. Photos.