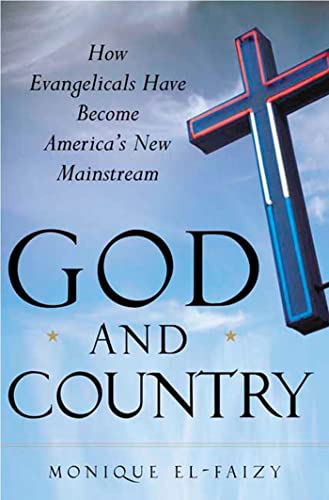 God and Country: How Evangelicals Have Become America's New Mainstream

Billed as a primer on evangelical Christianity for the millions of Americans with only a superficial understanding of its inner workings, El-Faizy's book delivers impressively on its promise. Raised in a strict fundamentalist church, El-Faizy left it behind in college and now looks back at her roots through the lens of the urban, liberal, secular journalist she has become. This insider-outsider position combined with her crisp writing and wide-ranging research make her the perfect bridge from one world to the other. She writes both critically and appreciatively of this growing movement, laying down the historical context for how evangelicalism grew out of austere fundamentalism and into a come-as-you-are ministry that reaches across multiple social boundaries by emphasizing God's love. El-Faizy takes her readers on tours of megachurches, the exploding Christian publishing and music industries, evangelical colleges and political activism. Along the way, she sprinkles the text with important (but never intrusive) observations about the evolution of religion in America and ends with some surprising and intriguing predictions for the future of Christianity. Among the gaggle of books rushing in to translate the gulf between red-state and blue-state America, this one shines. Well-written, engaging and informative, this snapshot of American evangelicalism is a must-read for students of American religion.