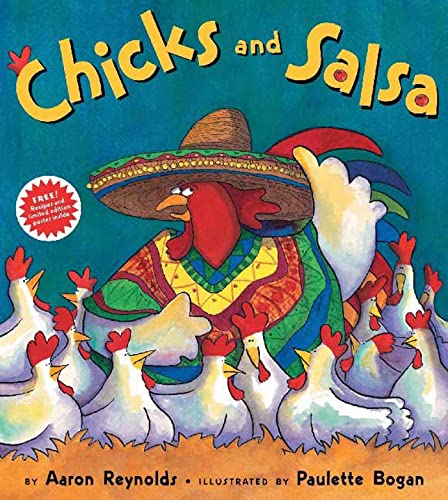 Not only is this book funny, it's culturally tapped-in—after all, salsa sales now reportedly outpace those of ketchup. When the chickens at Nuthatcher Farm become fed up with their feed, a charismatic foodie rooster shows them how to pilfer tomatoes and onions from the garden and whip up a wicked salsa ("though nobody was quite certain where the chickens got the chips"). And Southwestern cuisine fever soon spreads to the ducks and pigs; within a few pages, they're feasting on homemade guacamole ("though nobody was quite certain where the ducks got the avocados") and nachos. The fad comes to an abrupt end when Mr. and Mrs. Nuthatcher decide they want a piece of this culinary action, but the rooster isn't fazed: he immerses himself in French cookbooks ("though nobody was quite certain where the rooster learned how to read") and discovers his inner Julia Child. Reynolds punctuates his wry, snappy text with the kind of knowing, running jokes that kids love, while Bogan's ( ) fiesta-bright comic watercolors evoke the spirit of vintage Warner Bros. animation (astute readers will also note that the barnyard mice seem to be the suppliers of the harder-to-find ingredients). Even confirmed macaroni-and-cheese eaters will devour this literary fandango, which winds up with recipes for nachos, "quackamole" and salsa. Ages 4-8.