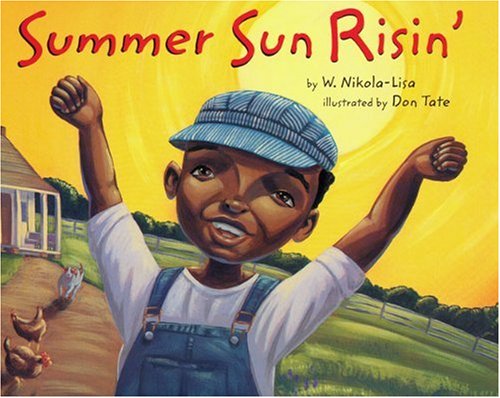 An African-American boy and his parents tend their farm while marking the transit of the ever-changing sun in this plainspoken paean to agricultural life. Tate's () stylized full-bleed paintings, shown to advantage in the book's horizontal (10" × 8½") format, exaggerate the expansiveness of the plains by rendering the horizon as a gentle but unmistakable arc. It's as if the farm were hugging the edge of a globe, the earth as round to the narrator's eye as the constantly visible sun. The characters' highly sculpted faces suggest the contours of the land, and their expressions radiate confidence and satisfaction. While the tweaked perspectives occasionally can be unsettling (in a view of the boy at breakfast, the dishes seem to slide straight down the surface of the tabletop), the pictures will immediately engage readers. Short verses comment on farm activities and the relative position of the sun. Adopting a laconic, rural voice, Nikola-Lisa () sometimes crosses the line into monotony. Still, he conjures up a compelling, comforting rhythm from the accumulation of small details: "Birds in the roost,/ kittens in the yarn,/ Cows linin' up/ down by the barn./ Pa cracks the door,/ I swing it wide./ Summer sun's shinin',/ floodin' inside." Ages 3-6.